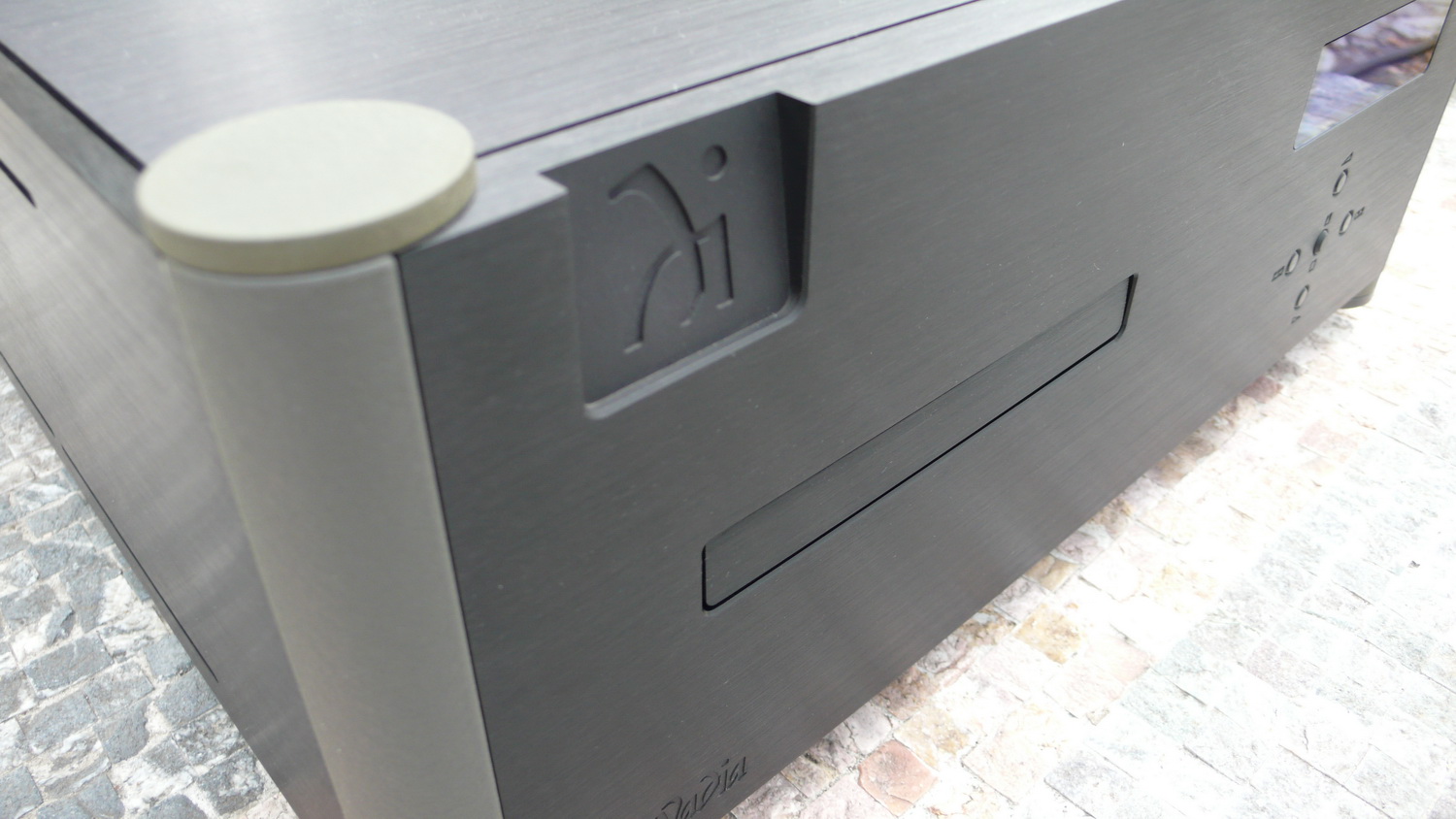 Wadia 781i was at the end of my long search for SACD player. I started with Krell, then moved to Linn Akurate, then McIntosh, for a few weeks auditioned Ayre but finally fell in love with Wadia.

Wadia 781i was used exclusively for SACD replay, Naim CDS3 was my workhorse for CDs. 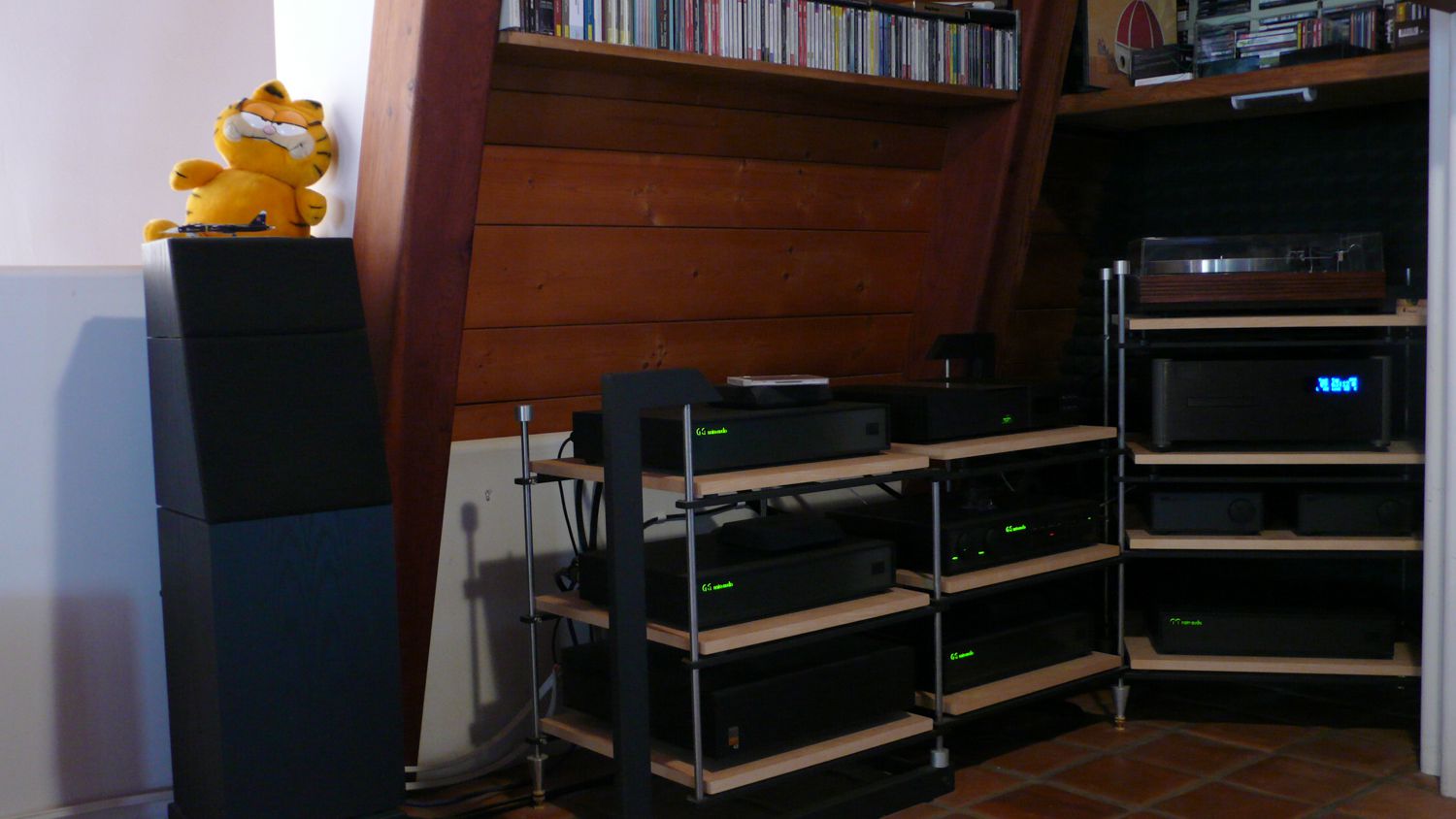 Having a few thousand CDs but less than 200 SACDs meant that CDS3  had to be sent to AVOptions every few years to get a new laser, but Wadia was a trouble-free player of very little use and flawless SACD replay. The only glitch was that once in a while CD drawer needed a little nudge to close. After getting a tip from HFA/hifi-advice.com that internal “gain” switches can be reset to make Wadia sound more “fluid” or more “snappy” I decided to open it.

To open Wadia you have to flip it over and unscrew four cone feet first: 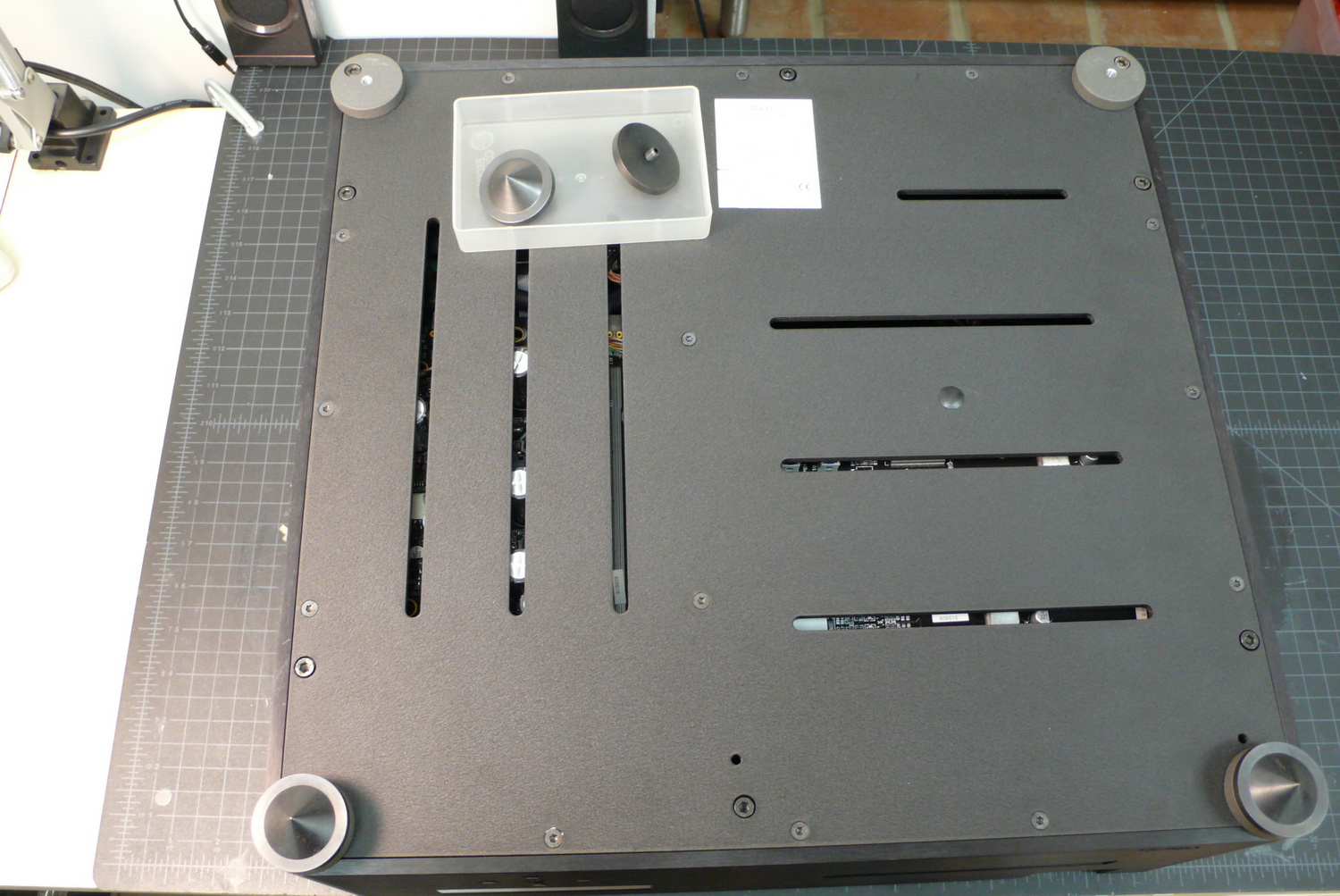 5/32 hex wrench is needed to get out 6+4 screws holding the top cover: 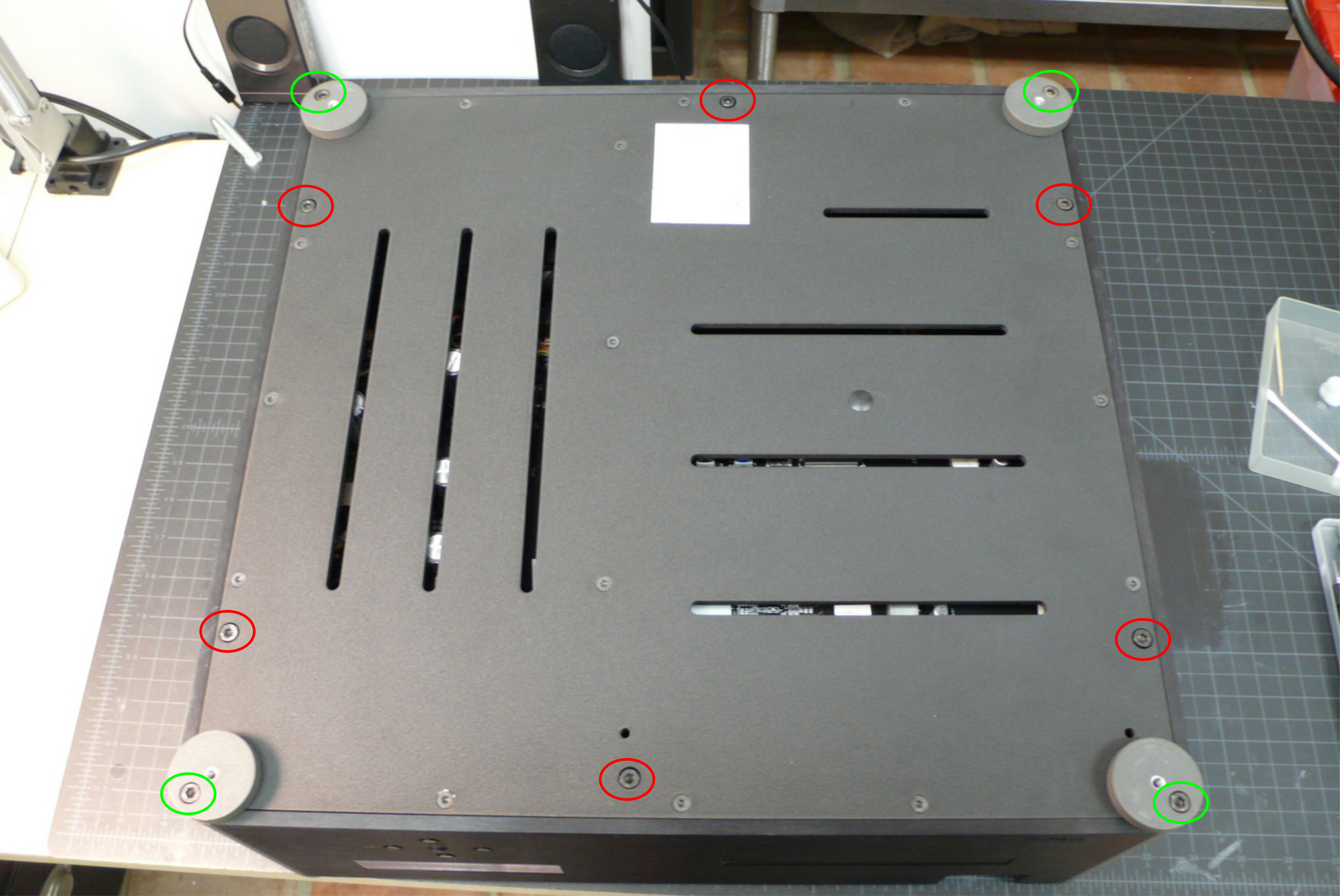 The easiest is to get out the screws marked Red first, then  flip Wadia onto some kind of rotating table  so that the corners would overhang the desk: 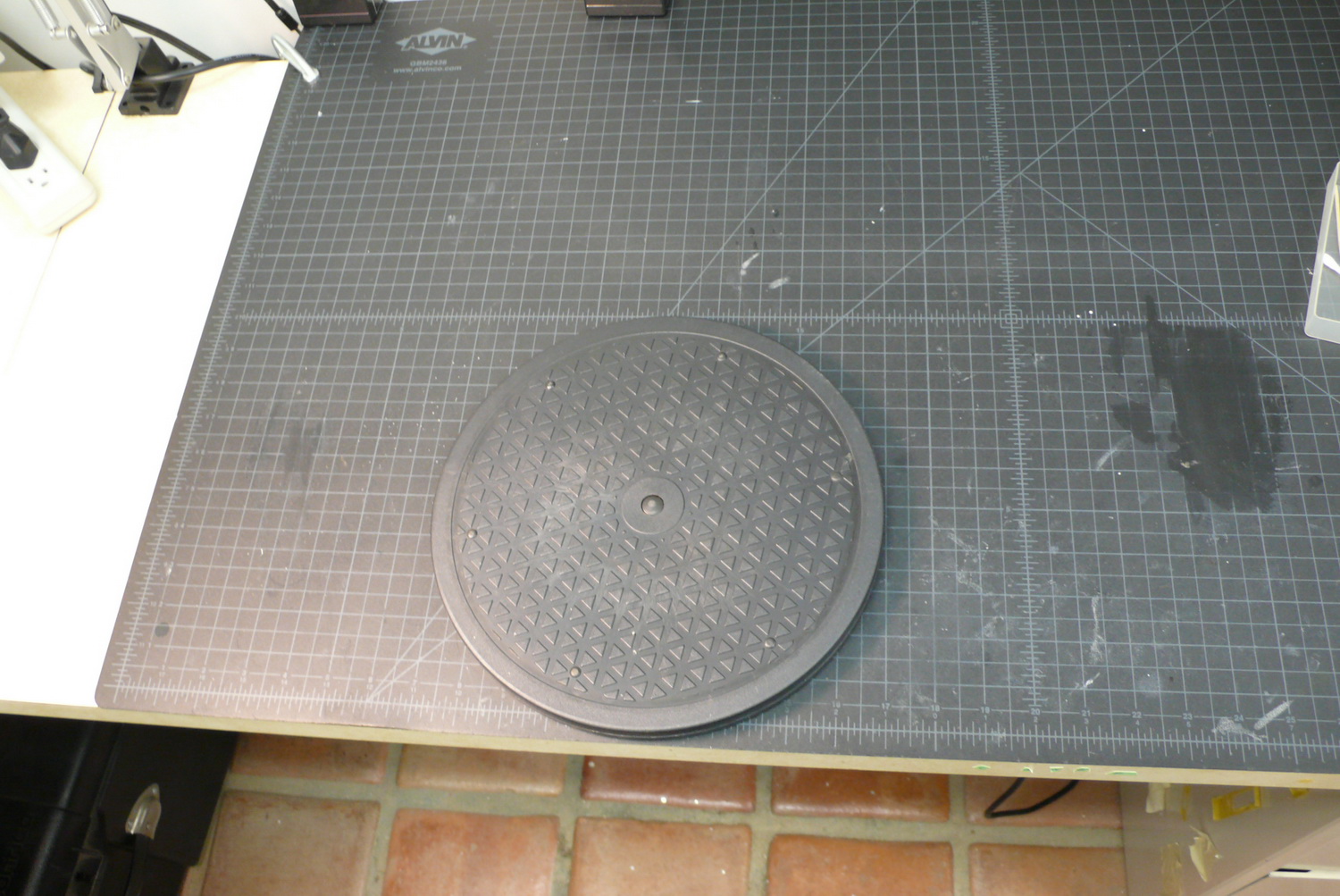 and then remove the screws holding the corner pucks (marked Green). Screws marked Green are longer! This releases the top cover: 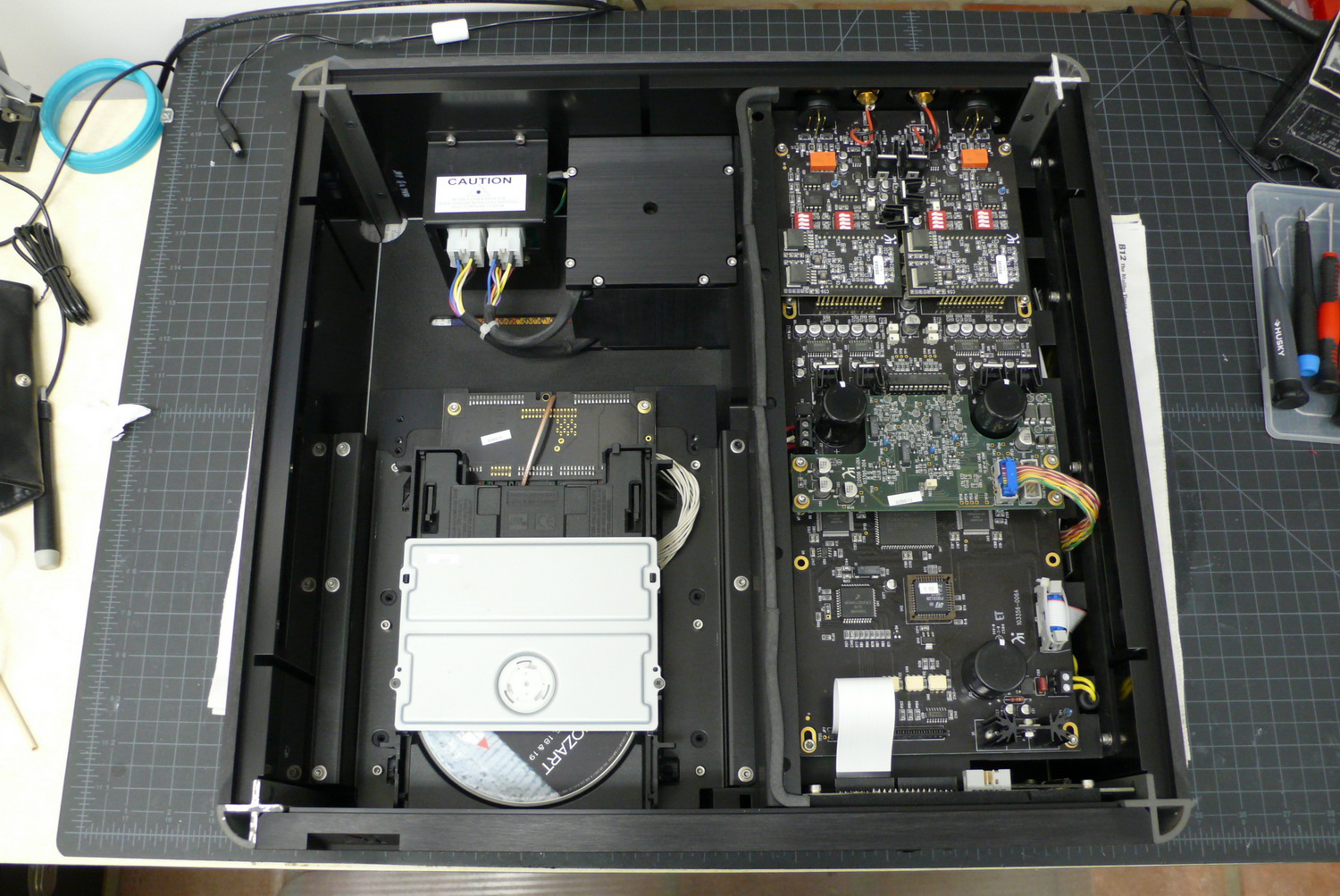 The Gain switches are at the back of the unit. Below is Wadia setting, as received from the dealer. Set for “fluid” sound (using HFA terminology): 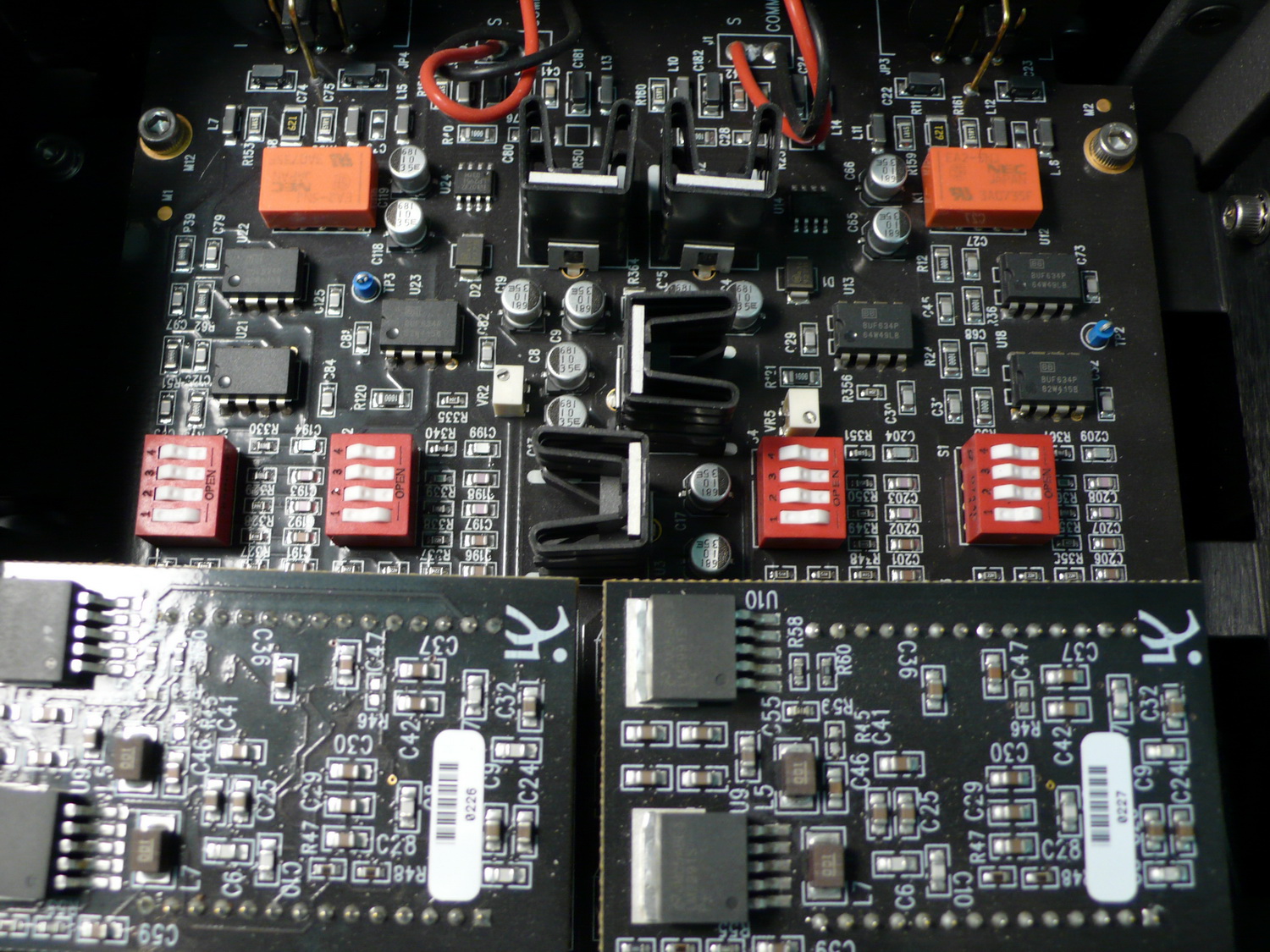 I set them all at Max gain (all “open”), if combined with “Digital Algorithm B” Wadia sounds as close to “Naim Sound” as I have ever experienced from non-Naim player. 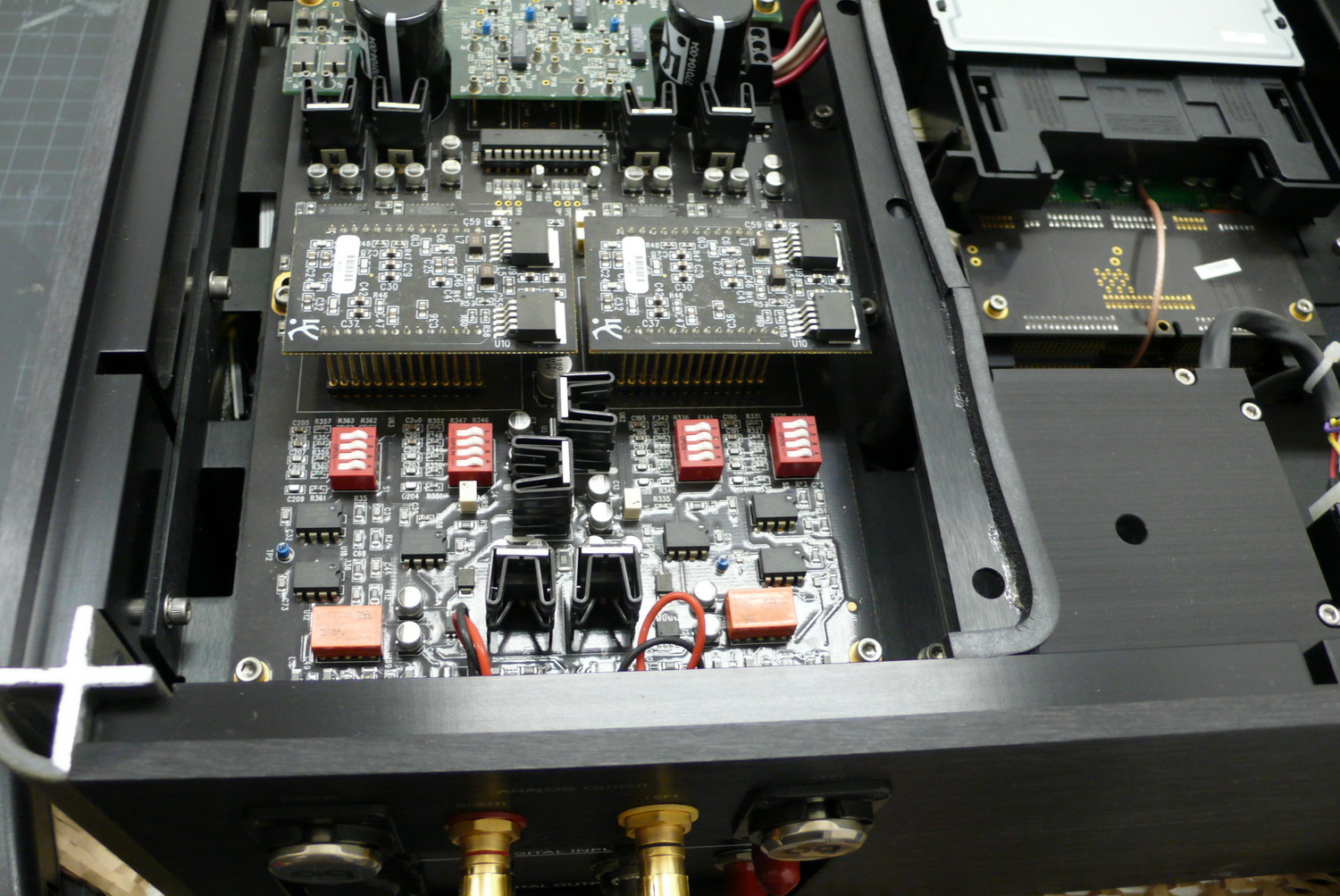 Next is the glitch with CD drawer mechanism. Plastic pulley cracked and was sitting a bit loose on the spindle. Here is the cracked piece: 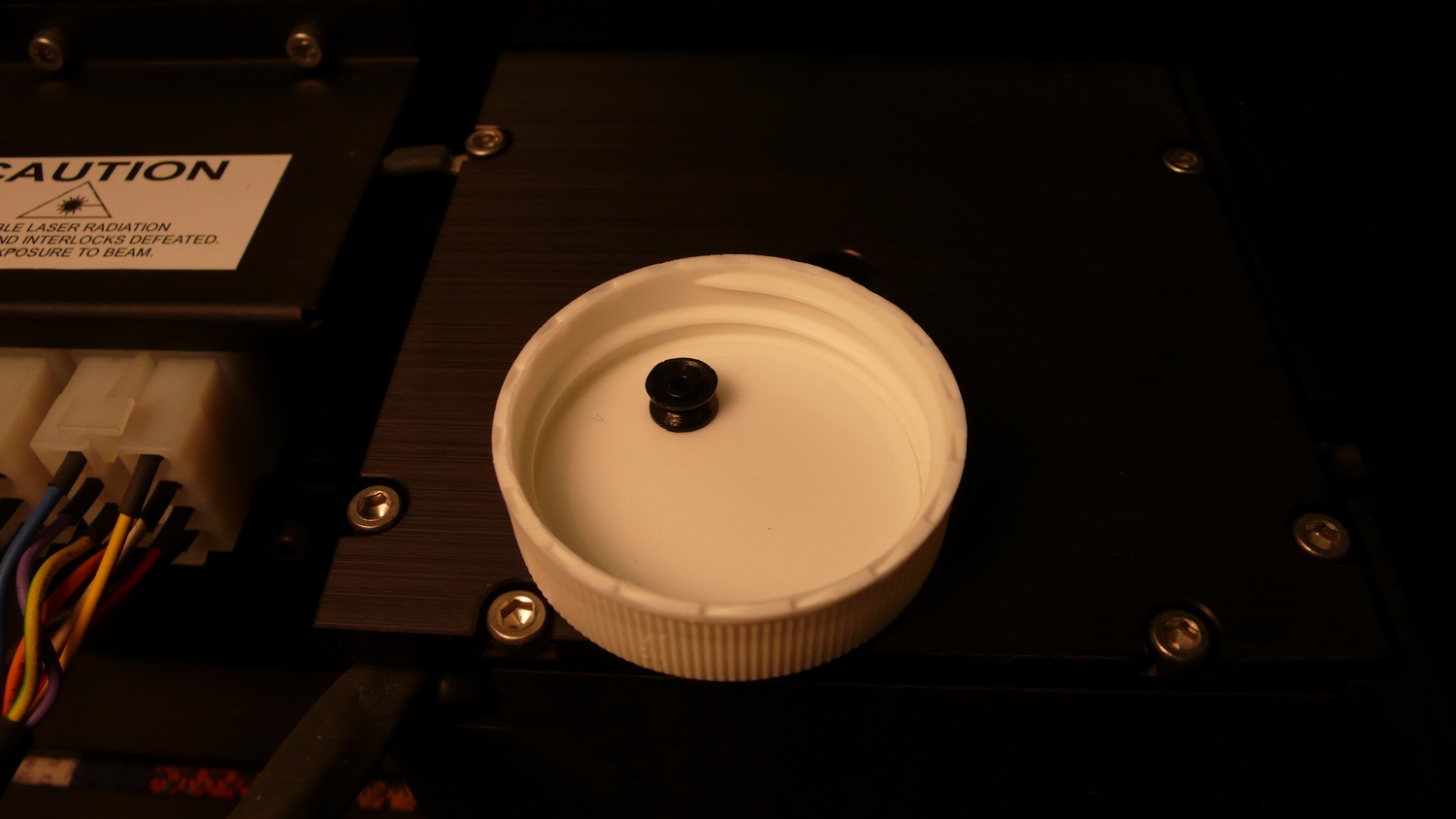 and the new one already installed: 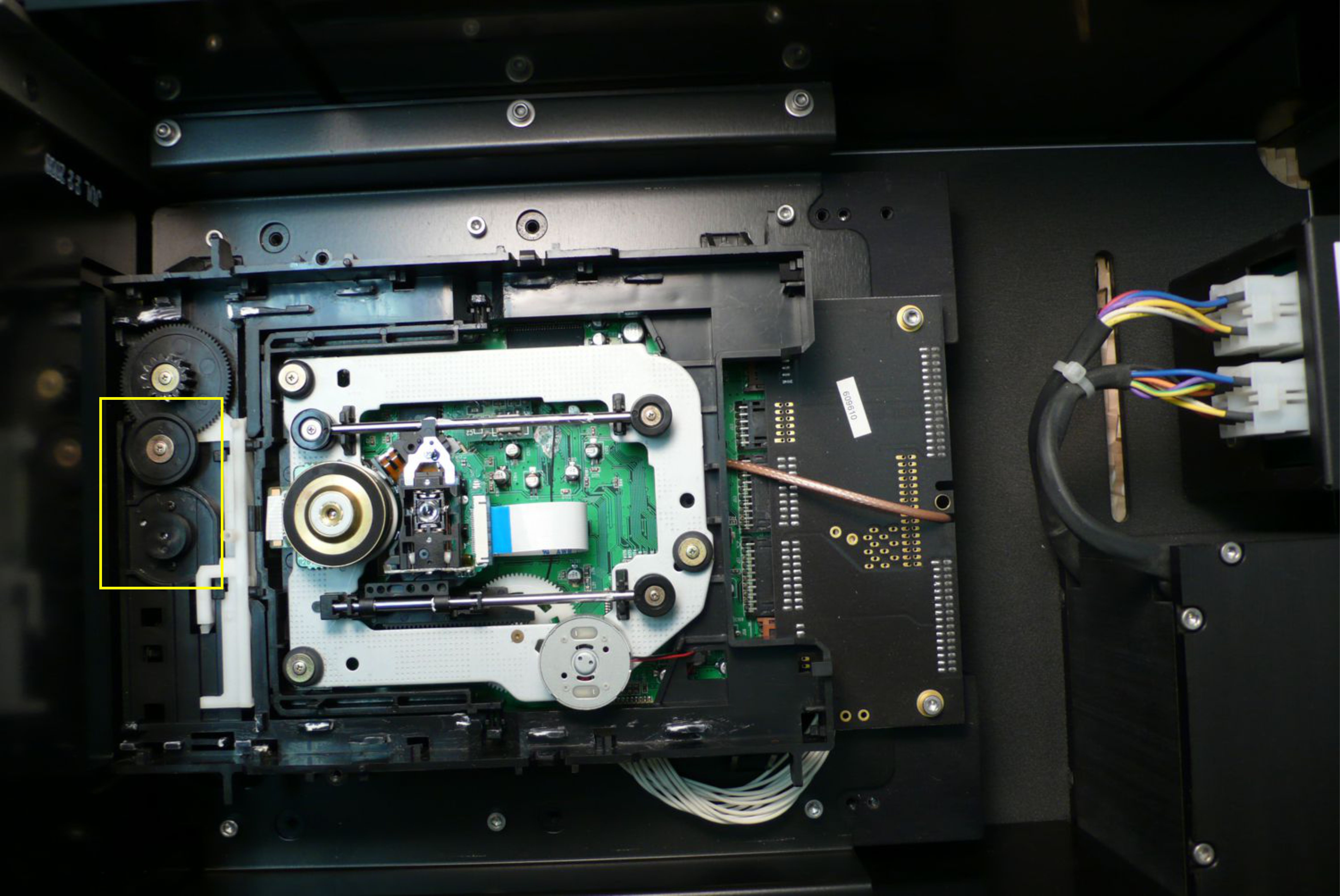 Fresh rubber belt, and Wadia goes back to work…

A few months ago I decided to move Nakamichi LX-3 cassette deck into my main system.  Naim CDS3 was packed and moved into storage, Wadia became a centerpiece for CD/SACD replay: 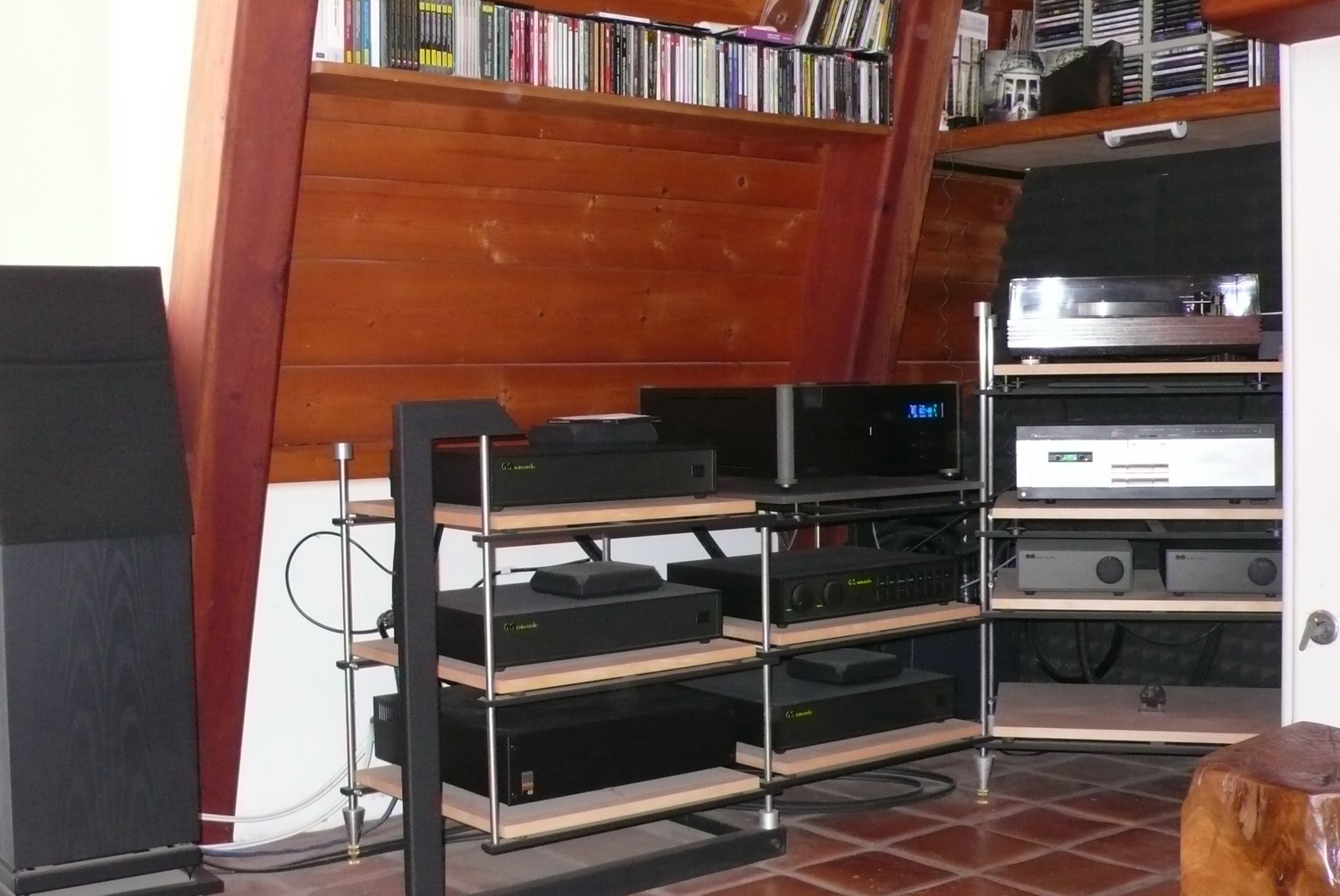 And only then I realized that Wadia refuses to play quite a few CDs from my collection. When loaded, such CDs make horrible noise of something unbalanced being rotated at high speed, then NO DISC message appears. CDR and CDRW copies of these same CDs were played without any problems, same with scratch-test CD. My suspicion that problem lied with CDs, not Wadia, was confirmed by Steve Huntley, the designer of Wadia 781, then the owner of Great Northern Sound Co, and now with Resolution Audio. In his own words:
“There is a large variability in CD manufacturing and if the disc is not perfectly circular, or the center hole is off, or the pits are not equally spaced to the center hole its much harder for the player (laser and servo circuitry) to read it. So the lathe [Audio Desk Systeme CD Lathe] is exactly the right solution. Nothing specifically wrong with the Wadia…just picky about the discs it plays. Unfortunately discs themselves are not held to tight standards of manufacture.”
“Of course a Discman is designed to play anything and while the unit is jumping around all over the place….not exactly the design criteria of a Wadia mechanism. Also units (low cost players) have huge amounts of error correction going on so they can play CD’s with peanut butter and jelly on them, kids finger prints, etc! That error correction does not help the sound….the less error correction the better. So again just a totally different design criteria.” 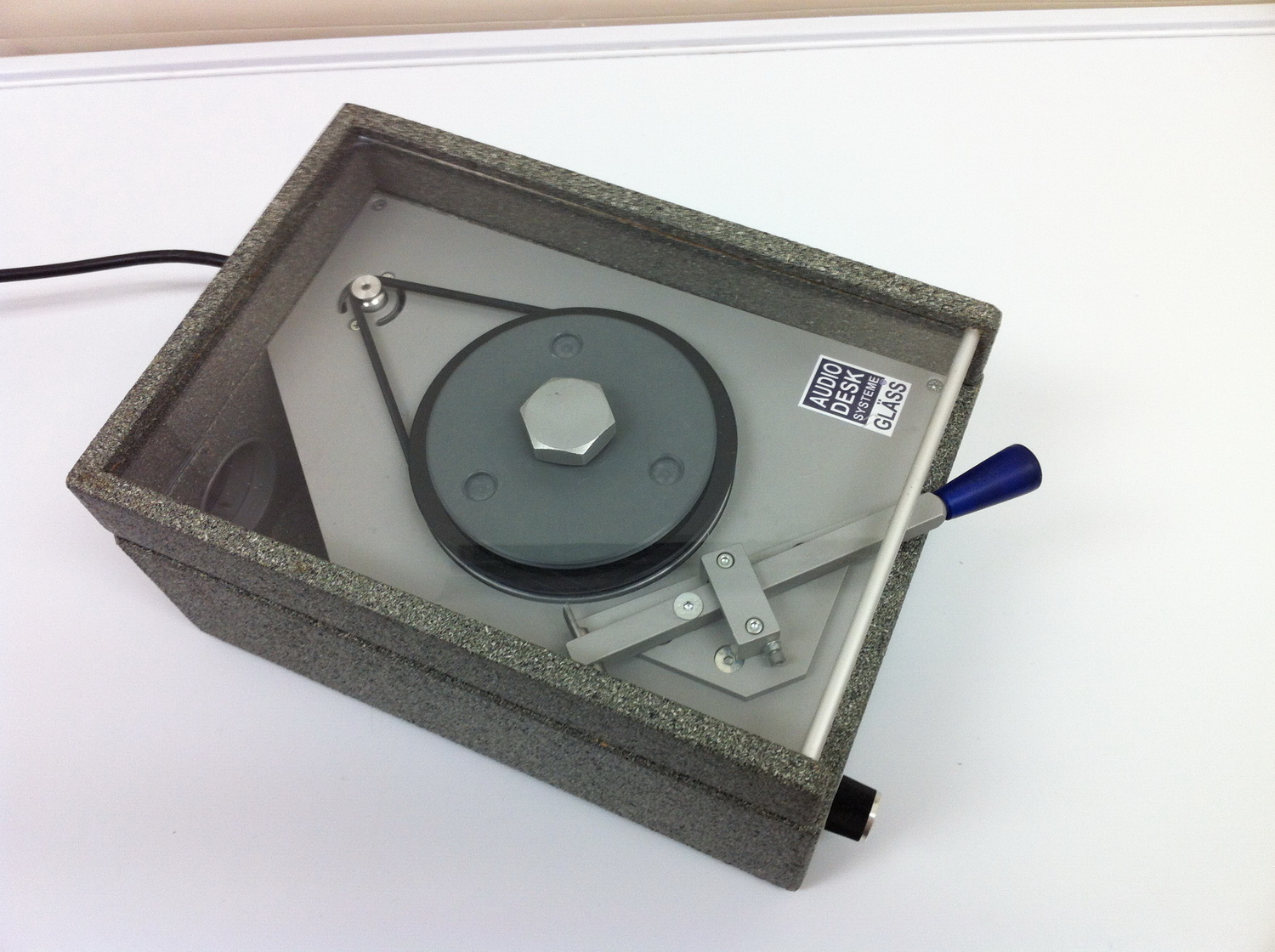 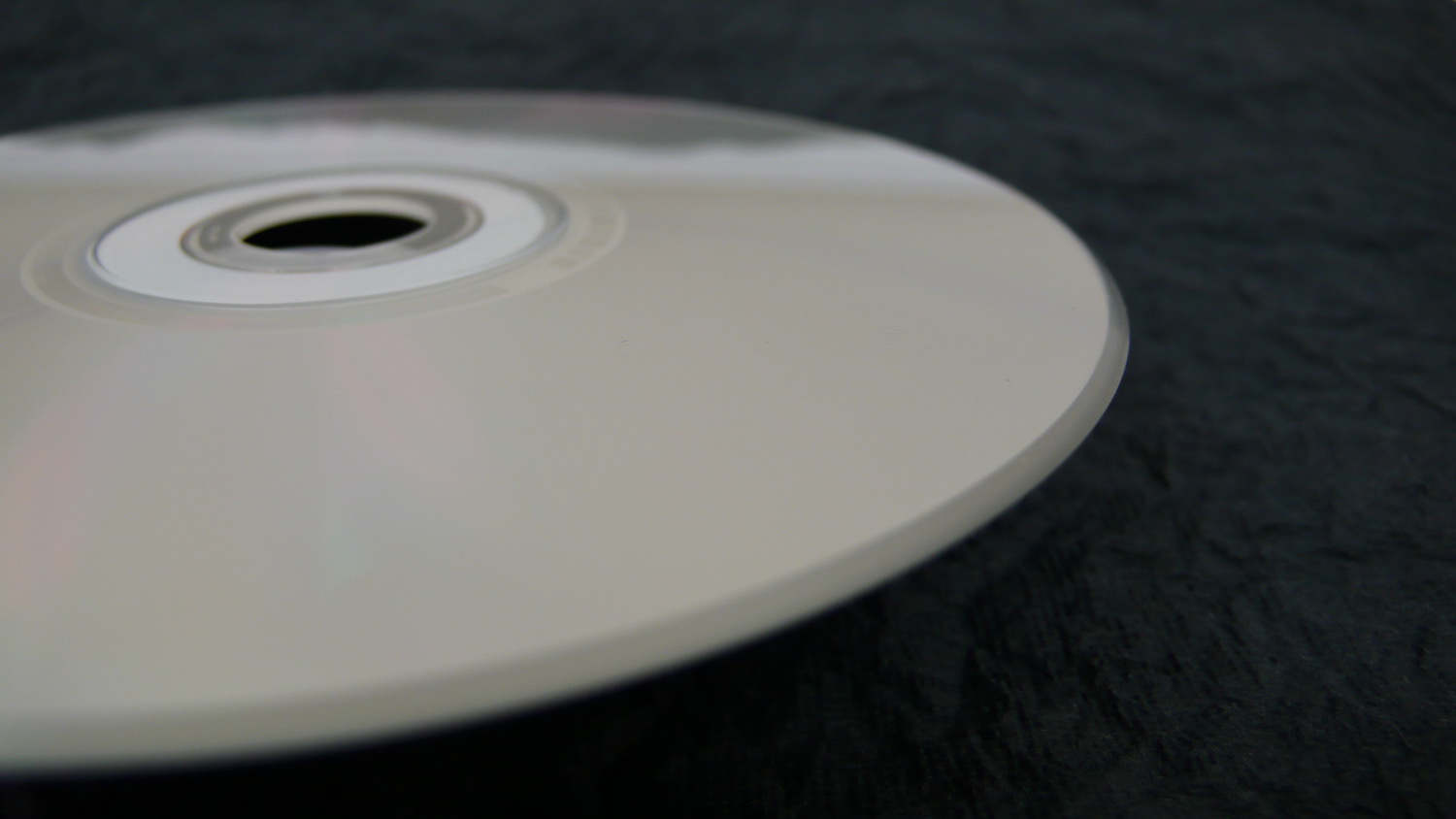 Some CDs remained unplayable even after edge trimming, based on the sound of vibration coming from Wadia, they still remained unbalanced.  After an hour of trial and error I managed to balance one such CD.  A piece of tape made it absolutely quiet during play. And playable! 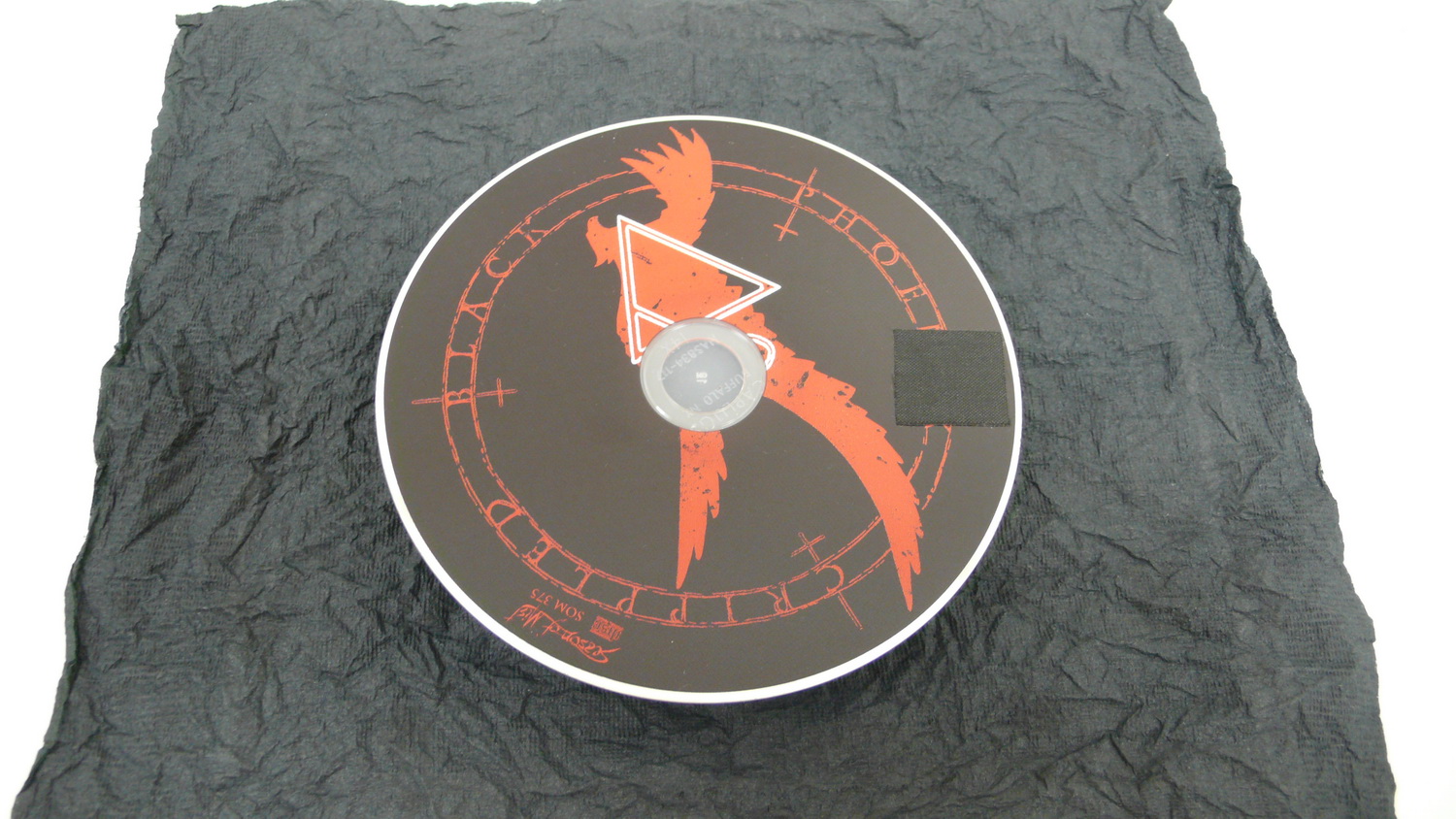 Now comes the fun part! Me questioning the Authority: Steve Huntley rightfully dismissed Discmans but why would my Naim CDS3 play such unbalanced CDs without any glitches? To my ears, Wadia does not sound any better than Naim CDS3 player. At some point I decided to open Wadia yet again and to check why its CD transport vibrates like crazy when spinning badly pressed and/or eccentric  CDs.

It turned out that the hinges of CD mechanism made a rattling sound when unbalanced CD was played, its resonance frequency was very unfortunate for Wadia: 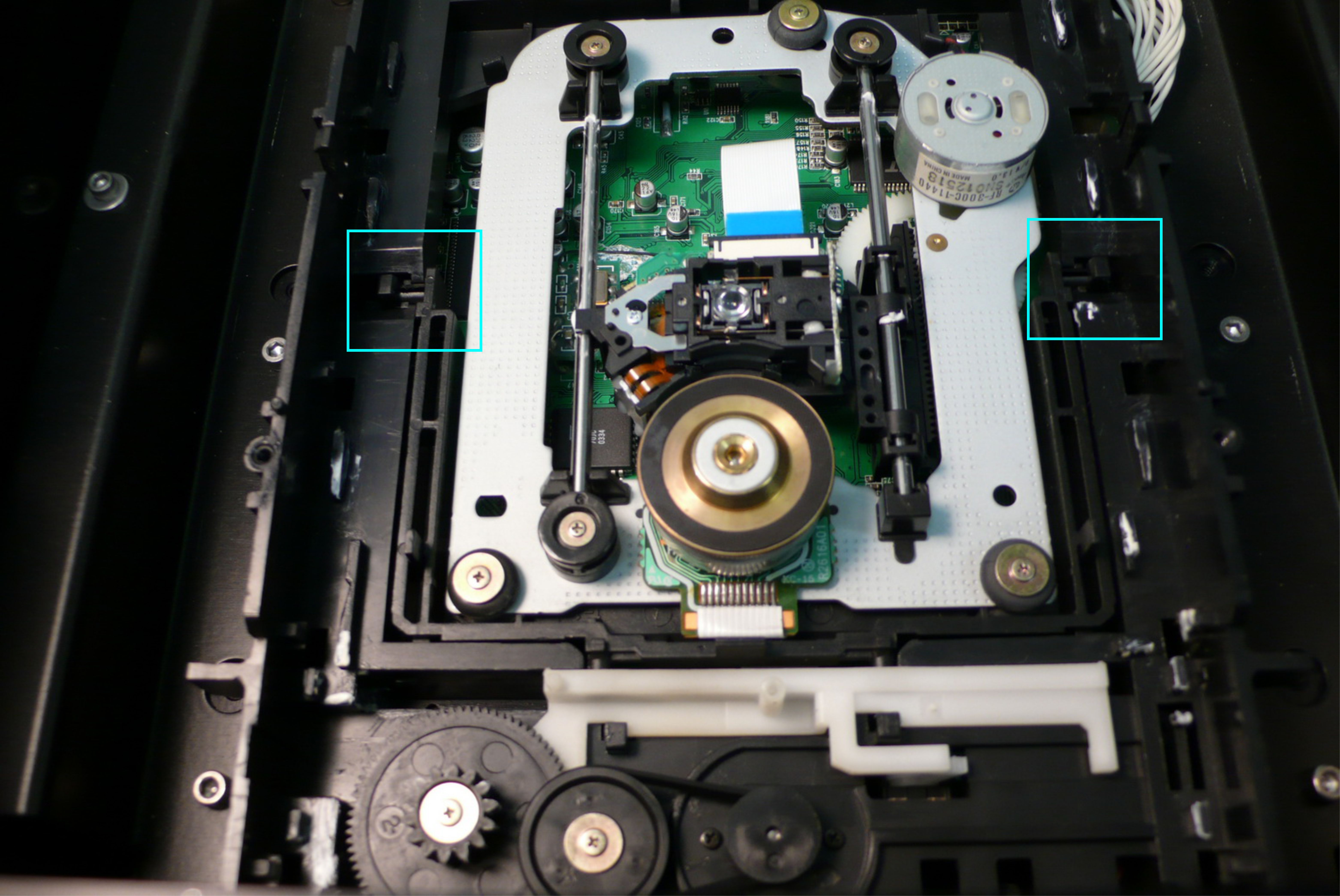 Then came the weird part: Wadia would play CD when it is held in place by a puck removed from another player: 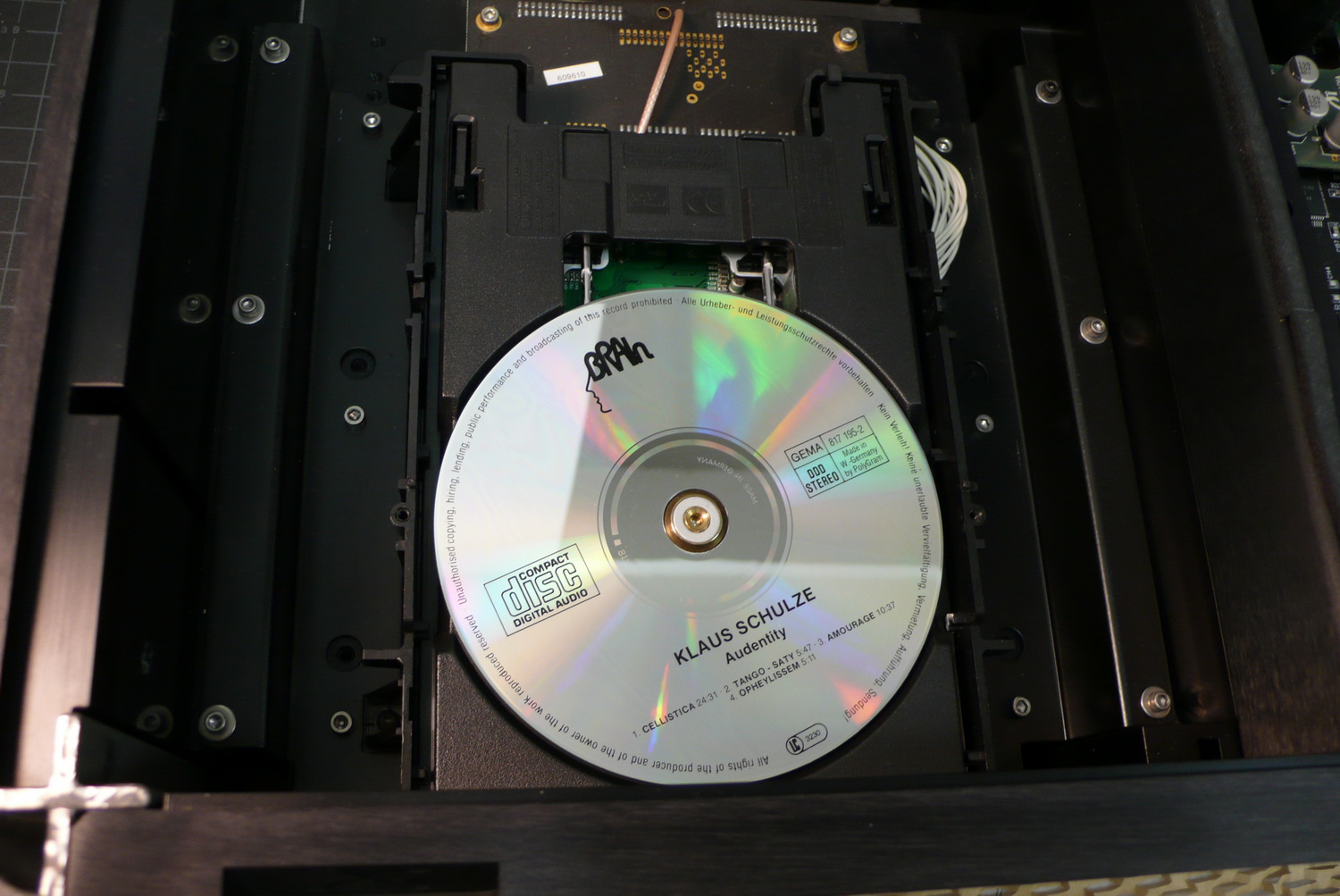 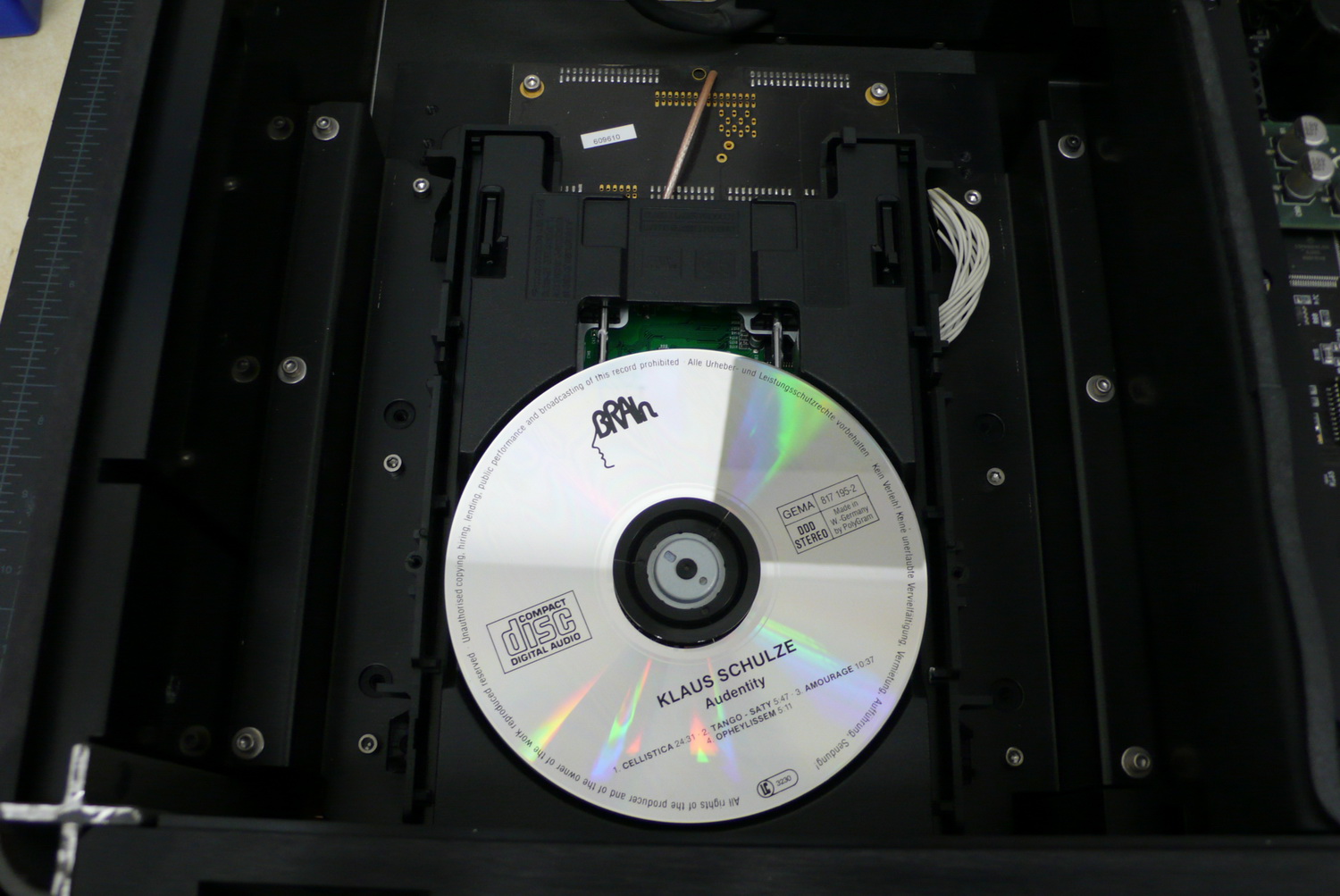 but won’t recognize the disk with its original top plate and puck in place: 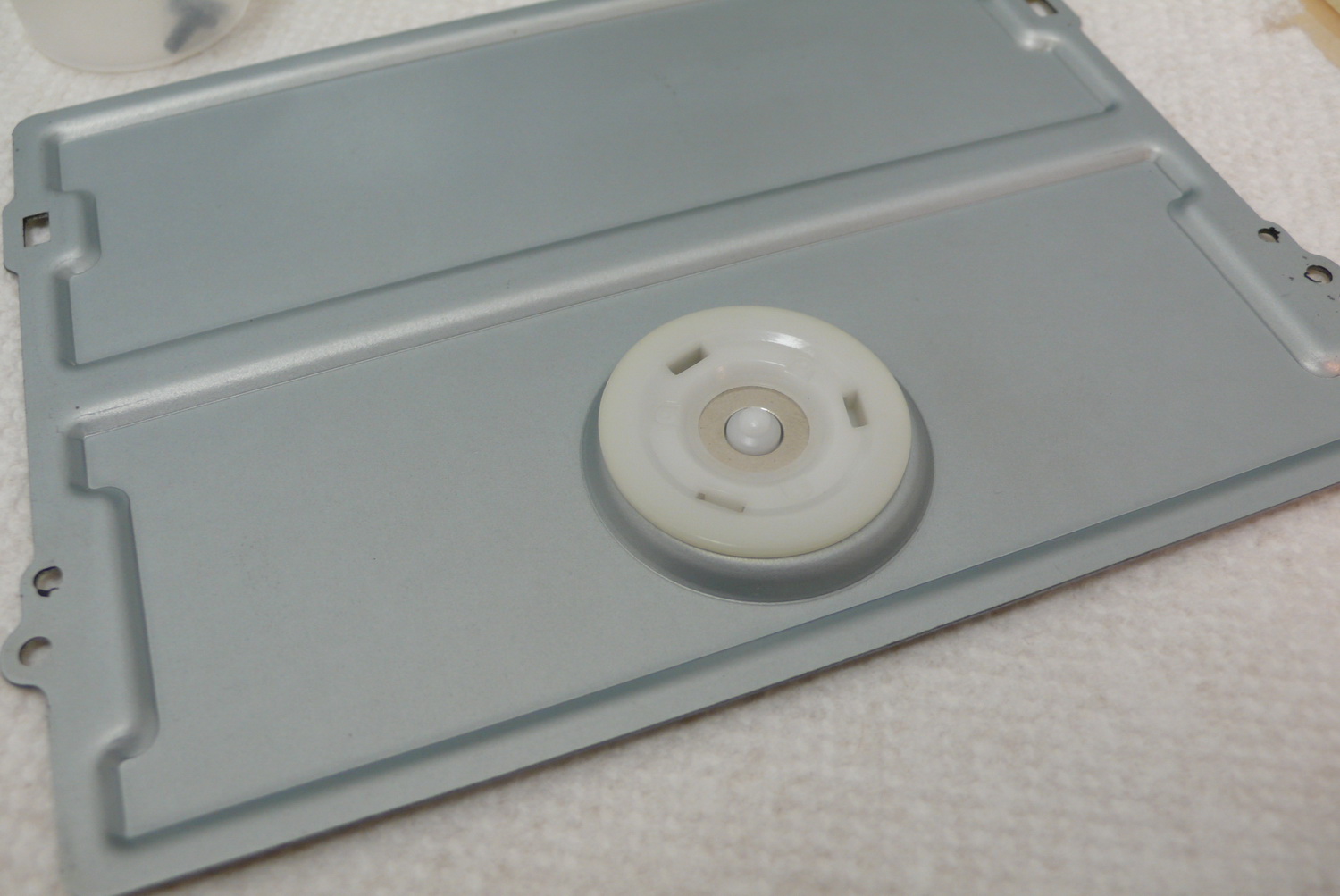 Puck itself received a ring of vinyl, this did Not fix the problem. However, once I attached a strip of black tape over the  laser path, Wadia successfully played each and every CD: 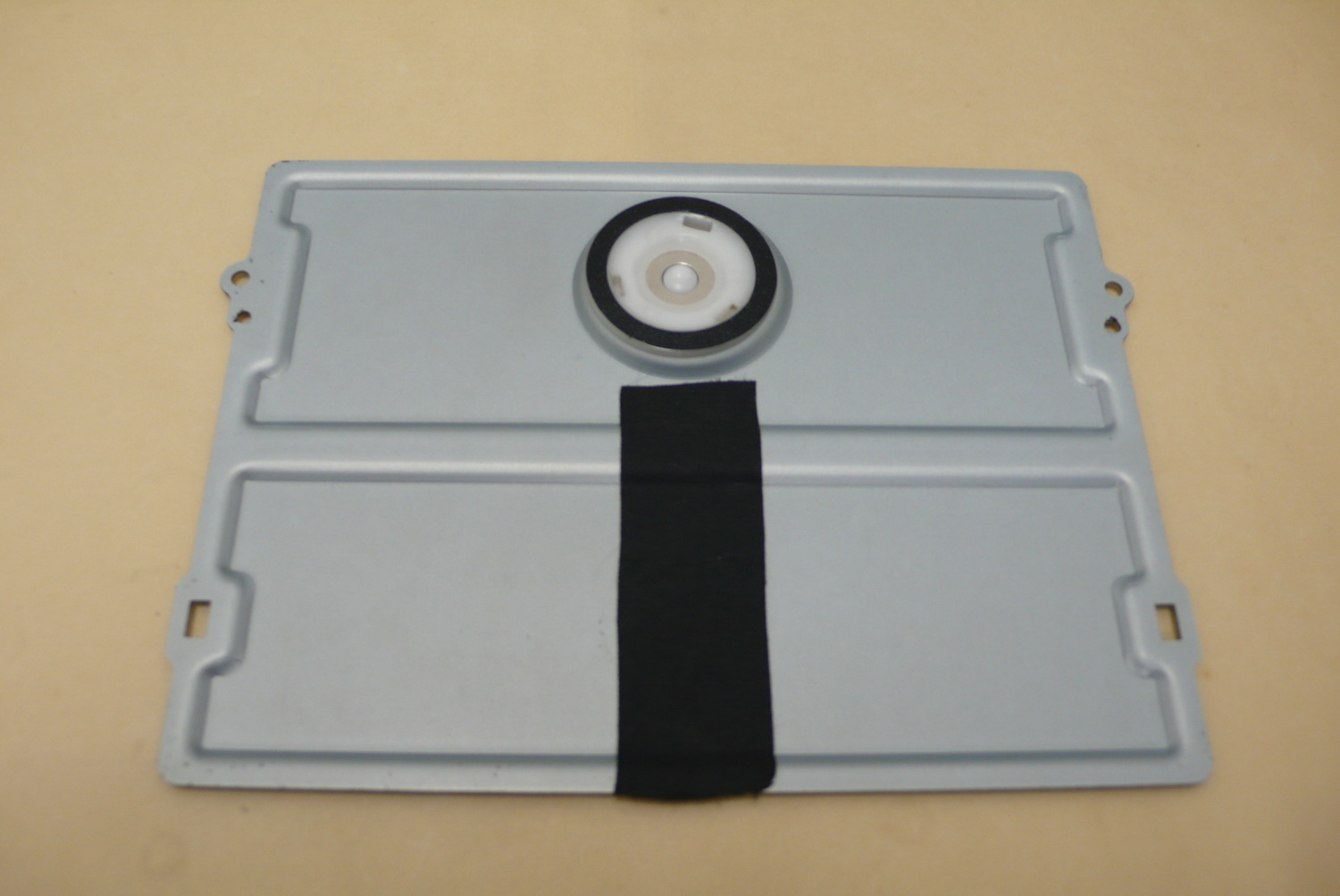 Is this a proof that “scattered light”, Green Pen, and everything else we know about “snake oils” is false? All I know is that if it was not for the “snake oil” debate raging around hi-end I would have never tried anything this simple and stupid!!! This reminded me that all Naim Audio players get a coat of flat black finish for their CD mechanisms. Paint itself costs them almost a 100 (pounds or dollars?) per one drive. Maybe Wadia should have done the same…

To be on the safe side I painted the cover with flat black, then reattached a strip of cloth tape: 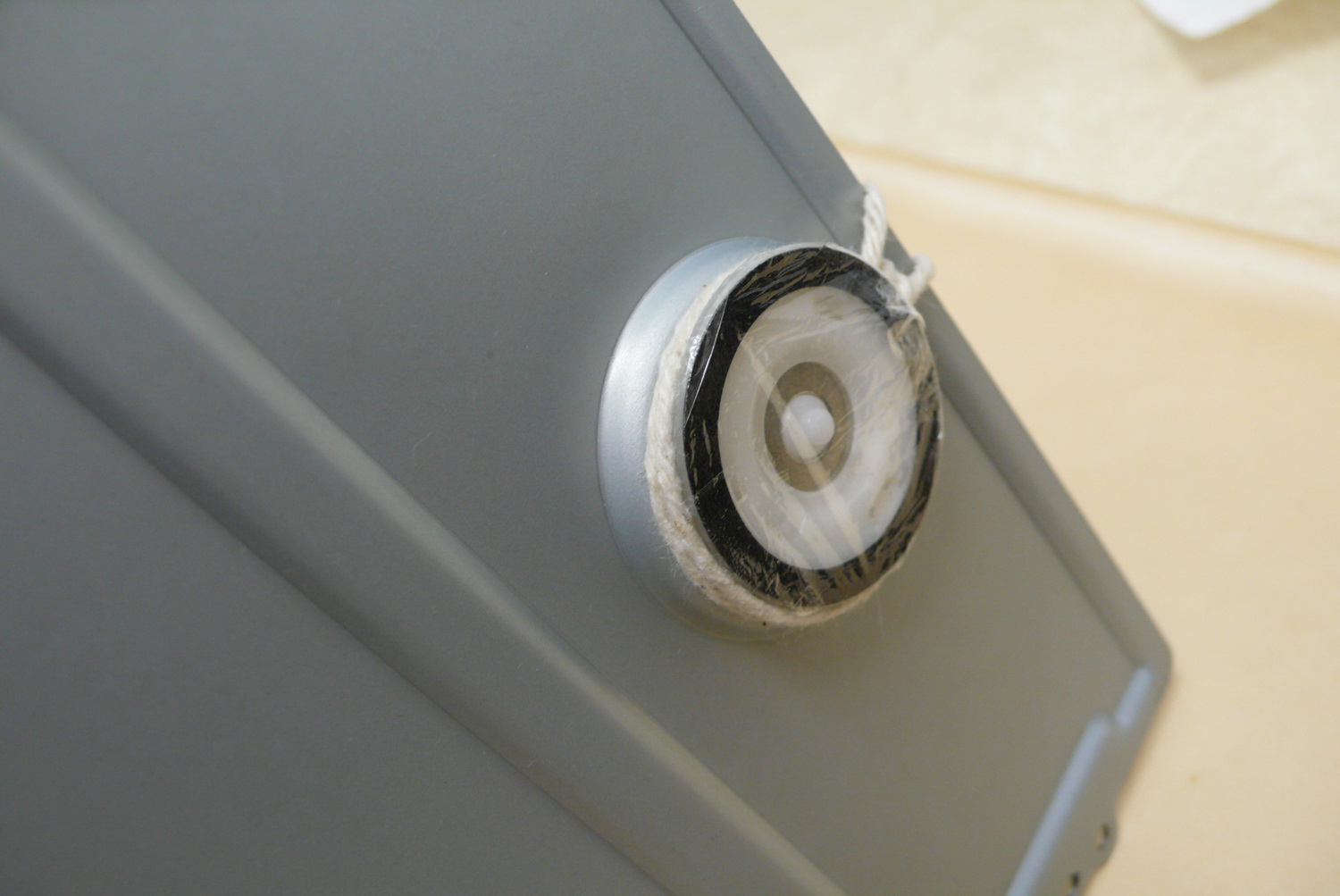 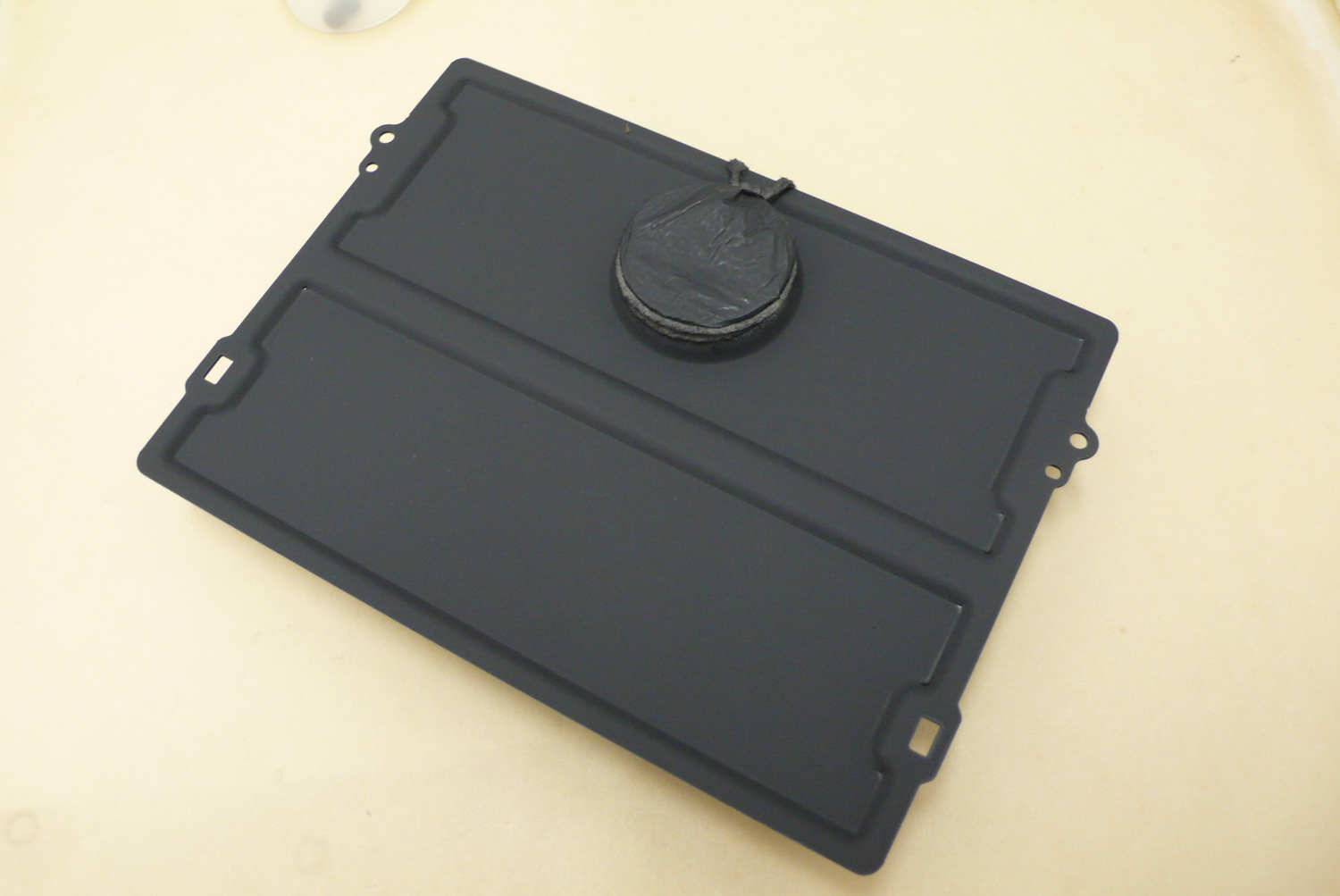 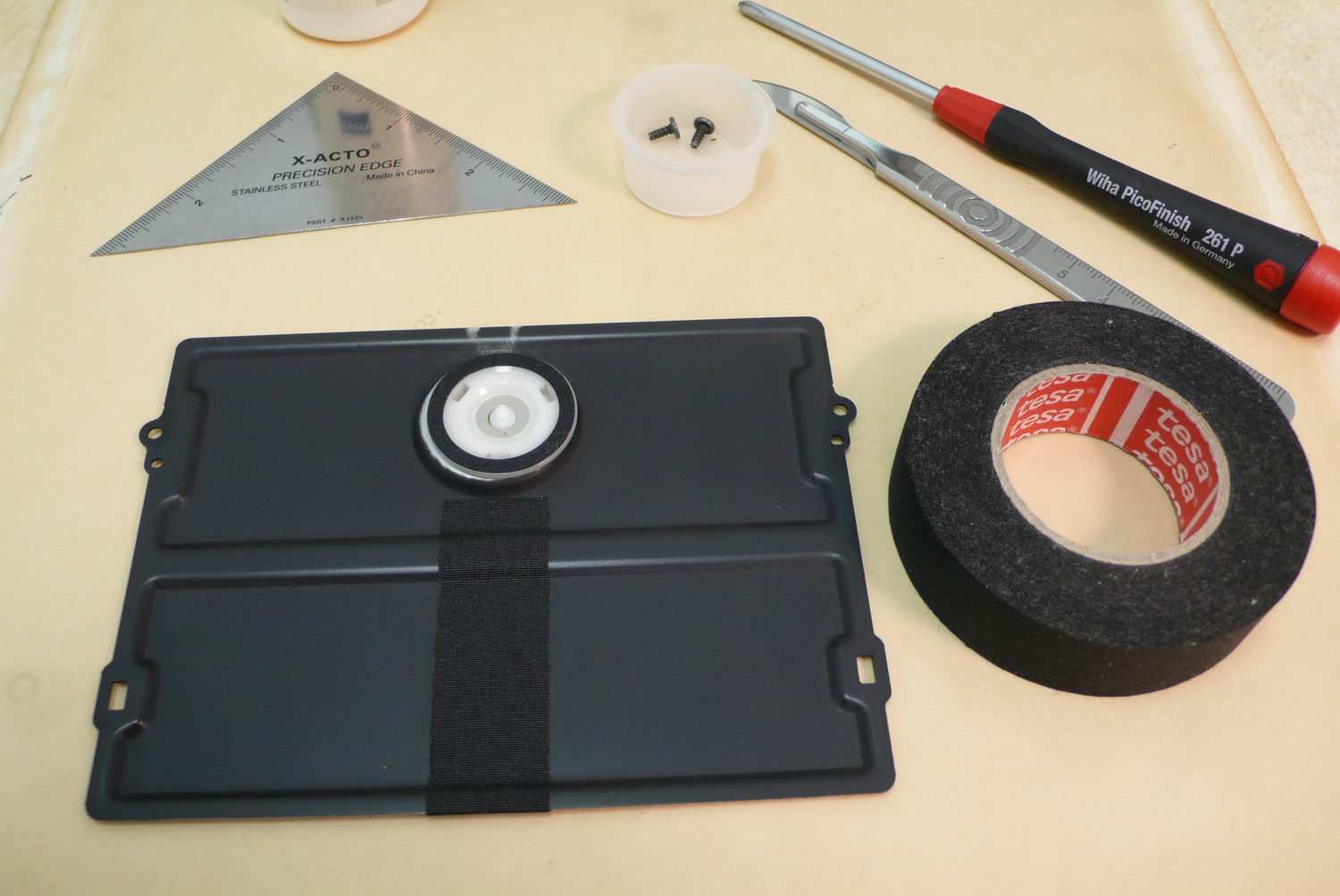 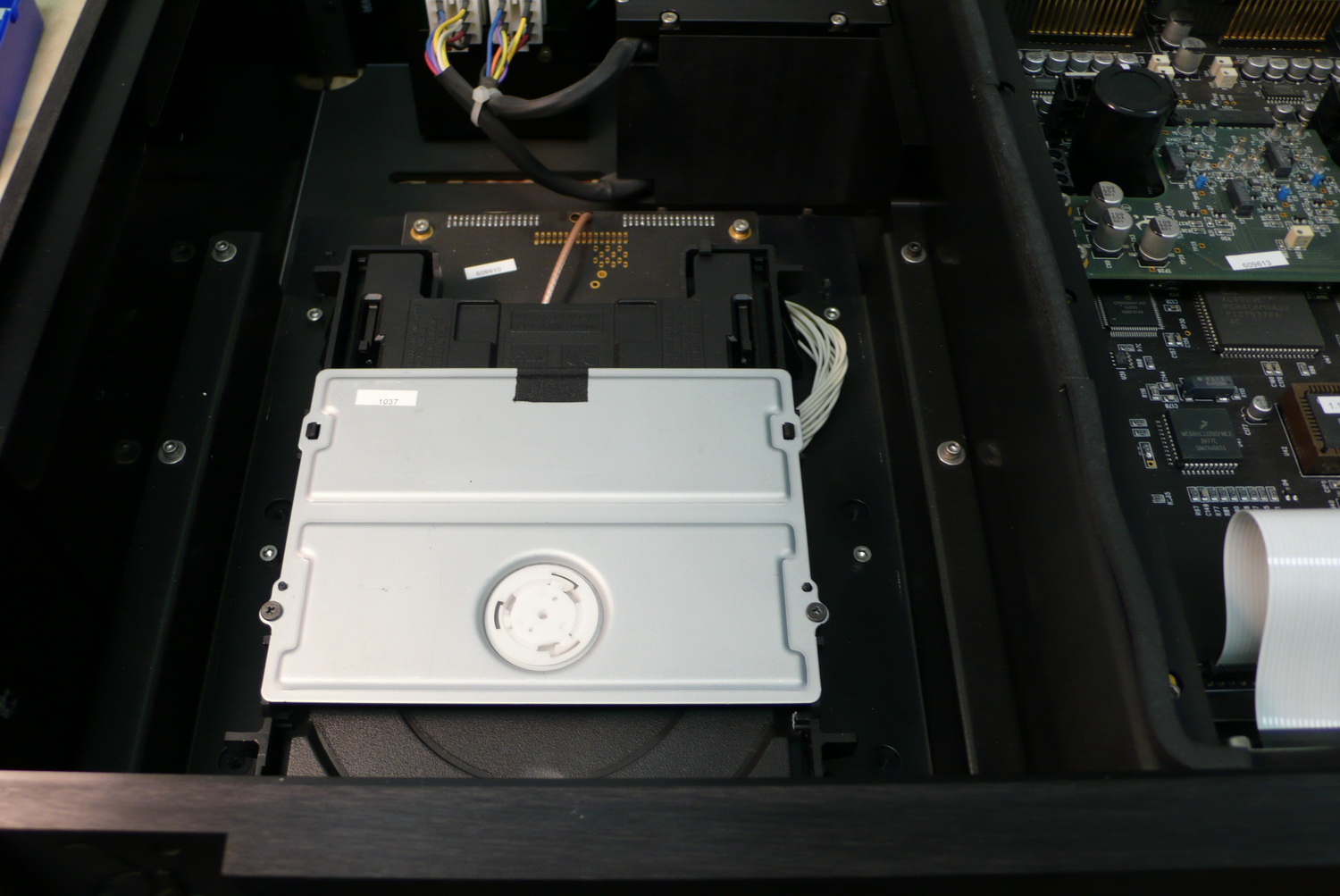 Tools’n’Stuff used for this “mod”: 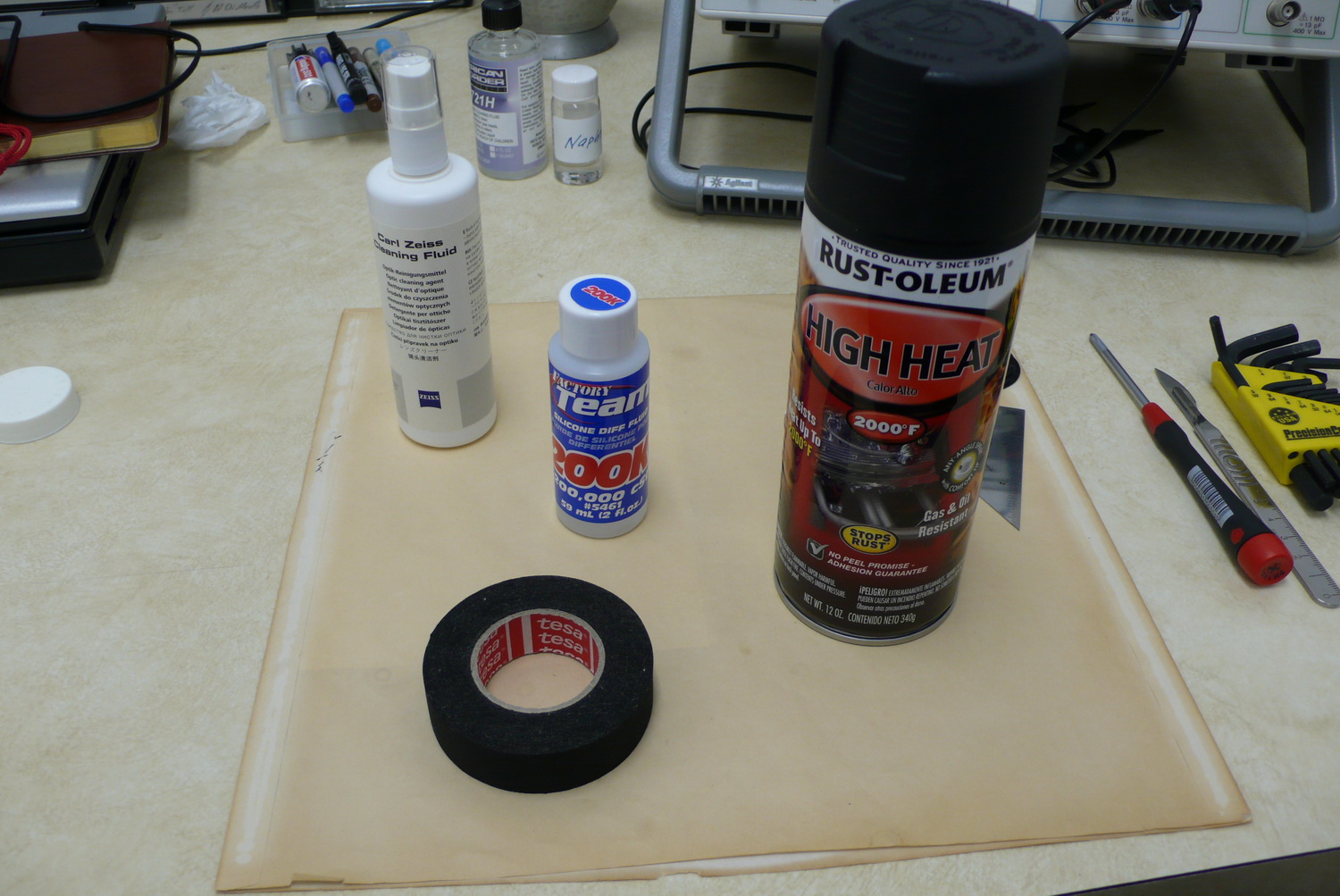